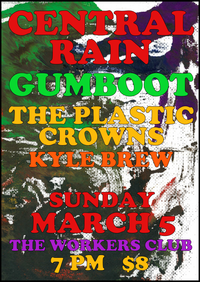 With current single “Hurricane Stan” garnering plenty of notice and a brand new album in the can, we're hitting the stage at the Workers Club on March 5 for a Sunday evening to rock your socks off - check this line-up out for size!

Gumboot are the pre-eminent purveyors of post-surf idiosyncratic goth rock. Their unique drama of unsettling post-surf punk combines to create a bewildering and at times awkward listening experience that after an initial 'what the hell is that', becomes incomprehensibly likeable…

The Plastic Crowns were the surprise package of December’s Xmas EVEN show, opening the night to the delight of friends more used to seeing them in the crowd than on the stage. They may be named from an EVEN lyric but they are no tribute band - their original three-piece rock sound seriously impressed everyone lucky enough to catch them. Gigs are rare so don’t miss them!