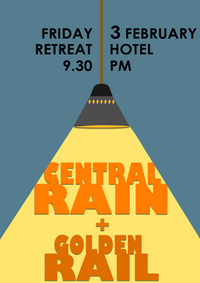 Central Rain are back for their first show for 2017 with a brand new album to road-test! Luke Thomas has graced The Retreat Hotel’s stage many times with The Pictures, Deserters and The Ronson Hangup, and is joined on stage by friends from Ronson, Header and Paul McManus & The Mayblooms. Header also contributes members to The Golden Rail, the latest project for Perth jangle pundits Ian Freeman and Jeff Baker, with an album due for vinyl release later this year. A double treat not to be missed!