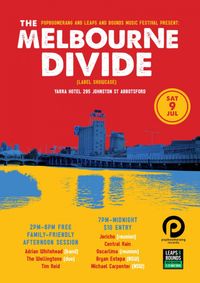 Popboomerang Records is very proud to present 'The Melbourne Divide', a label showcase for this year's Leaps and Bounds Music Festival, on Saturday July 9 at the Yarra Hotel Abbotsford.

The event, curated by Popboomerang's Scott Thurling, will feature nine of the label's musical acts over a huge day/night event. The big scoop for the event is the reformation of 90s guitar pop icons Oscarlima and Jericho.

The theme for the show was inspired by the song of the same name by longtime label artist Danny McDonald. McDonald said the song, released by Popboomerang last year as part of its 100th release celebrations, was written about the City of Yarra area and in particular, the Yarra River. "Melbourne's north and south is divided by the river, which tends to create a sense of physical and cultural separation. It is equally divisive and unifying and it is fundamental to defining our sense of place, culture and identity."