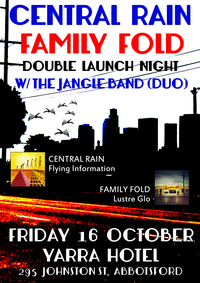 Central Rain and Family Fold are both celebrating debut releases and have decided to join forces along with the Jangle Band (duo) for a very special double launch spectacular!

Central Rain is the antidote to autotune: no-frills, melody-drenched indie pop/rock that Blurs The Church, Neil Finn and The Go-Betweens. The first solo project for Melbourne’s Luke Thomas (The Pictures, Deserters), the six atmospheric and reflective songs on debut mini-album Flying Information are written from the heart, and recorded and performed with a refreshing honesty. On stage they take on a dynamic new sound in the hands of a five-piece band of friends and familiar faces, including The Ronson Hangup’s Mal Pinkerton on cello. With the recent release of their debut album Lustre Glo, Family Fold will be playing their new music live when they take to the road from September, playing shows in Sydney, Melbourne, Brisbane and Canberra. The pop sensibilities of singer-songwriter Paul Andrews (ex-Lazy Susan) have continued to grow under the Family Fold moniker, which has seen the Lustre Glo album receive very positive reviews that reflect Andrews’ ability to create warm pop songs with wry observations about everyday life. The Jangle Band in duo mode will kick things off in style, and both the launch CDs will be available for purchase on the night. A night of great tunes, great company and all good things – not to be missed!